Since their introduction to the western world in the 1950s, magic mushrooms have been inextricably linked with the hippy movement. However, attitudes have changed, and over the years, their popularity has become more mainstream. Home Office data reveals a jump in the number of young people using magic mushrooms - from 49,000 in 2016/17 to 101,000 in 2018/19, while other sources suggest that these psychedelics have ‘become the drug of choice’ during COVID-19 lockdown.

Until now, drug testing individuals for the presence of psilocin - one of the active ingredients in magic mushrooms - has required hair samples to be sent overseas. However, Cansford Labs is proud to become the first lab to offer UK-based psilocin testing, meaning that results can be obtained more quickly, and that individuals who test positive and their families can start to receive the support they need more promptly.

Here, we give an introduction to magic mushrooms and their psychotropic compounds (psilocin and psilocybin) and explain the potential effects of the drug, and detail the benefits of UK-based psilocin hair strand drug testing.

An introduction to magic mushrooms, psilocin and psilocybin

Magic mushrooms - fungi with hallucinogenic properties - grow all over the globe, including in the UK. There is a huge number of different varieties, with the liberty cap and the golden cap being among the most common.

These mushrooms contain two psychotropic compounds: psilocin and psilocybin. Some varieties also contain additional, weaker psychotropics, like baeocystin and norbaeocystin. Generally, though, all magic mushrooms will have similar effects on the body.

"Magic mushrooms are ingested in one of three different ways."

As a rule, magic mushrooms are ingested in one of three different ways, depending on the variety chosen, and on personal preference. Some may be eaten raw (or dried and eaten), while others use dried mushrooms brewed like tea. Alternatively, it is possible to buy the hallucinogenics extracted from mushrooms in liquid drop form.

Magic mushrooms - whether fresh or prepared - are a Class A drug, making both possession and sale illegal.

The effects - and risks - of magic mushrooms

Magic mushrooms are taken for their hallucinogenic properties. The compounds contained within the fungi can distort the user’s view of the world, and may also lead to feelings of euphoria, excitement, happiness, awe and energy.

However, not every “trip” is positive, and hallucinations experienced with magic mushrooms can heighten the user’s senses in a disturbing way, as well as leading to anxiety, paranoia, an inability to determine what is real, restlessness, trouble focusing, disorientation, and a feeling of being overwhelmed. 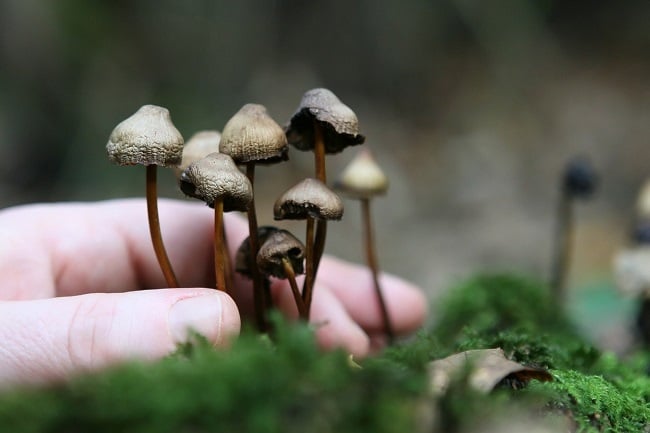 During certain circumstances, such side effects can be incredibly debilitating - and even dangerous. Over the years, these fungi have been responsible for individuals jumping to their death from windows and bridges, biting off the end of their tongue, and, in one case in Chicago, a man smothering his partner with a pillow after she experienced a bad ‘trip’.

The side effects listed above can also be problematic in certain workplaces: in roles where driving or safety-sensitive tasks are needed, for example. In cases such as these, fast and accurate testing is required.

While a urine test can generally only detect the presence of magic mushrooms in the body for 24 hours (traces can be found up to a week later in some individuals), a hair follicle test can determine whether someone has ingested them up to 90 days after consumption.

Hair strand drug tests are fast, incredibly accurate and will not only show magic mushroom usage, but can also test for the presence of a vast number of other drugs, as well as alcohol. They are practically impossible to tamper with, making them incredibly reliable for all manner of cases, whether for family law or social work cases or for workplace drug testing. And with Cansford Labs now offering a psilocin hair test, there is now no longer a need to send samples abroad for analysis, and results can be sent within three days of receipt at our laboratory in Cardiff.

The future of magic mushrooms

Currently, magic mushrooms remain a Class A drug. However, attitudes to the substance appear to be changing, and it could be possible - as with cannabis - that we may see the drug used in a clinical setting in the future.

"A single psilocybin dose can reduce anxiety and stress in cancer patients for up to five years."

The newly established Medical Psychedelics Working Group is lobbying for a change in law in order that scientists can research whether magic mushrooms could help ex-soldiers to overcome trauma. A New York study showed that a single psilocybin dose can reduce anxiety and stress in cancer patients for up to five years, while earlier this year, Compass Pathways received investment of $80m towards its psilocybin therapy programme for depression.

Magic mushrooms may have a bright - and legal - future ahead of them, but for the time being, they remain illegal and potentially incredibly detrimental to both working and personal lives. With UK-based testing now available for the first time, it is easier than ever to determine whether an individual has a problem that needs treating - and fast.

To find out more about accurate, fast and reliable drug and alcohol testing, get in touch.

Images via Unsplash and Pixabay