Get a quote
Workplace Drug Testing, Drug and alcohol testing

A management guide to drug and alcohol testing in the workplace

Every employer has a duty of care to its employees. That duty of care encompasses a huge number of factors - including dealing with drug and alcohol misuse, and its ramifications.

Whether you already have a workplace drug and alcohol policy in place, or you’re considering implementing a drug and alcohol testing programme, we’ve rounded up everything you need to know.

Why do employers test for drugs and alcohol?

A DrugScope and Alcohol Concern survey found that 60% of employers have experienced problems as a result of staff drinking alcohol, while 27% say that drug misuse in the workplace is an issue.

Employers should be aware that drug and alcohol misuse is their problem, not just the problem of the individual concerned. As the HSE states, “You could be breaking the law if you knowingly allow drug-related activities in your workplace and you fail to act. It is just as important to know the implications to both your employees and business of not tackling drug misuse, particularly where safety is involved”.

When do employers test for drugs?

There are five different situations in which employers may conduct a drugs test:

Image: By sodawhiskey via Adobe Stock

This is conducted as part of the recruitment process, making the company’s attitude to substance misuse clear from the start. Often included as part of a pre employment medical test, these tests can establish usage over a certain period. The sample type you choose will determine the detection window.

Random drug testing is used to understand the levels of usage of alcohol and drugs in the workplace. It acts as a deterrent, as all employees will be aware that they could be tested at any time - and that if they refuse to test, it may be treated as a positive sample. It is down to the organisation to decide how often testing will be carried out, and how many they will randomly test each time.

These tests are used when a business suspects - whether from strange behaviour or because of a rumour or a tip from another employee - that a worker is under the influence of drugs or alcohol. Such testing should only be conducted in line with the company’s workplace drug and alcohol policy.

Post-incident or post-accident testing requires an employee to be tested on-site, as quickly as possible, after an accident or incident to establish whether the influence of drugs or alcohol may have been to blame. It is an incredibly effective tool in accident investigations, and should include everybody involved.

Regular monitoring, after an employee who has tested positive for a substance has been enrolled on an Employee Assistance Programme of rehabilitation. Here, it is important to put a contract in place at the start to inform the employee that they could be tested at any stage during the rehabilitation process.

Which industries commonly test for drugs?

Industries that commonly test for drugs in the UK include professional sports, professional driving, aviation and construction. You can find more information on each below.

UK sectors where drug testing in the workplace is common include:

Which drugs are most frequently detected in workplace testing?

Our data reveals MDMA, cocaine, codeine and cannabis to be the drugs most frequently detected in workplace testing programmes.

Powder cocaine use is on the rise across the UK - and crack cocaine is growing in popularity, too. Purity has increased and prices have decreased, which could explain why usage is rising.

Cannabis has been in the headlines since it was first legalised in parts of the US and Canada, and with many touting its stress and pain relieving properties, it is unsurprising that workplace use continues to grow.

While the use of “party drugs” like MDMA and LSD fell during lockdown, use is still high - to the extent that there are calls for pharmacies to sell ecstasy and other drugs to improve health and reduce organised crime.

Use of prescription opiates, like codeine and fentanyl, has been growing steadily across the UK, leading to fears that users could become addicted and turn to black market sources or other alternatives if their prescriptions are no longer enough.

What are the signs of drug use?

While it can sometimes be hard to spot whether an individual is misusing drugs or alcohol, there are various signs that it may be an issue. These can be behavioural, psychological or physical, and such signs include:

In addition, drug or alcohol misuse can have visible effects on the eyes, which vary from substance to substance. 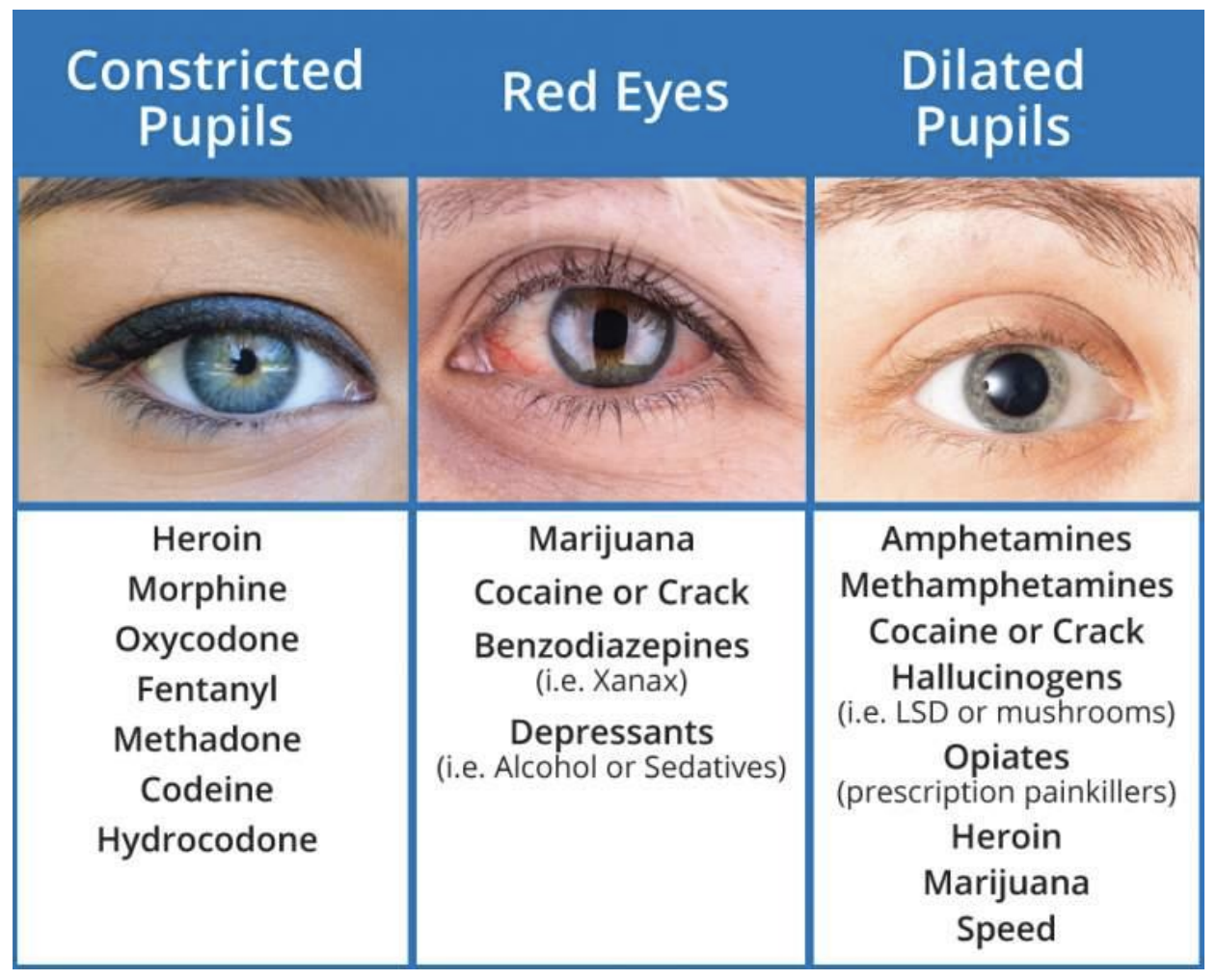 What are the types of drugs tests?

There are five key ways to test for drug and alcohol misuse. You should choose between them on a case-by-case basis.

A Home Office-approved breathalyser can establish whether an individual has consumed alcohol, producing legally defensible results. The device must be calibrated annually for valid results, and results must be recorded on a chain of custody form.

A swab is used to collect a sample of oral fluid, either on-site or at a laboratory. This is a simple, non-invasive collection method that is also hard to cheat - and laboratory oral fluid tests are incredibly sensitive and highly accurate. Point-of-care results are almost instant, but as presumptive positives, they must be followed up with a laboratory test. With a narrow detection window, this is best suited for drug testing in-the-moment.

Also available as either a point-of-care or a laboratory test, urine tests are widely used for establishing recent substance use. While sample collection is simple, it is also unobserved, meaning that extra measures need to be put in place to avoid dilution and/or adulteration of samples. As with oral fluid testing, positive point-of-care tests must be followed with a confirmatory laboratory test.

Hair tests are incredibly difficult to cheat, and are best used for testing for a history of misuse, due to their wide detection window which can cover weeks to months. Sample collection is simple and non-invasive, while results are highly sensitive, highly accurate, and can be turned around (by us) incredibly quickly. Samples must be analysed at an accredited laboratory, and a wide range of substances can be tested for. This method of testing is not suitable for in-the-moment testing, as it cannot indicate substance use fewer than seven days before the test.

A compact device is used to collect blood samples via a finger prick test: a convenient technique for collection, transport and storage. Highly sensitive and highly accurate, blood tests are incredibly difficult to cheat. Samples must be submitted to a laboratory for analysis, and (in Cansford’s case) can be turned around incredibly quickly.

Image: By Cozyta via Adobe Stock

What is chain of custody and why is it important?

Drug and alcohol tests have life-changing implications. Employers have a duty to protect their employees from a health and safety viewpoint, but must also be aware that a false accusation of substance misuse could have a serious impact on an employee’s personal and professional life.

This is why the chain of custody (CoC) - a user-friendly, step-by-step process ensuring legally defensible results - is so crucial in employers’ drug testing policies. The CoC protects both collector and donor from any claims of bias or cheating, and ensures that collection adheres to European Workplace Drug Testing Society (EWDTS) guidelines. It includes measures against sample tampering and adulteration, records the donor’s consent to testing, and ensures that the result belongs to the correct person.

What legislation do you need to know?

There are eight key pieces of legislation that those implementing testing in the workplace need to bear in mind.

Two sections of this Act apply to the workplace:

This Act states that, as business owners, you “have a duty to ensure, as far as is reasonably practicable, the health, safety and welfare at work of your employees”.

Management of Health and Safety at Work Regulations (1999)

Employers have a duty to assess any risks to their employees’ health and safety. Employees must also take reasonable care both of themselves and of others who could be affected by what they do at work.

If an employer knowingly allows an employee to work while under the influence of drugs or alcohol and their behaviour places either themselves or other employees at risk, the employer could be prosecuted.

This Act makes it a criminal offence for certain workers to be under the influence of drugs or alcohol while working on railways, tramways and other guided transport systems. In such a case, the transport system’s operators would also be guilty of committing an offence unless they had shown all due diligence in trying to prevent the offence from happening.

Applicable to all drivers, whether social or professional, this Act makes it illegal for anyone to drive or attempt to drive a motor vehicle - or to be in charge of a motor vehicle - on a road or other public place when under the influence of certain listed drugs or alcohol.

Image: By Rawf8 via Adobe Stock

Article 8 of the Convention states that, while everyone has the right to respect for privacy and public authorities should not interfere with this right, authorities may interfere in certain situations:

Corporate manslaughter was made a statutory offence to ensure that there were “effective laws in place to prosecute organisations where they have paid scant regard to the proper management of health and safety with fatal results”. There are various contributors that need to be proved for corporate manslaughter to be confirmed.