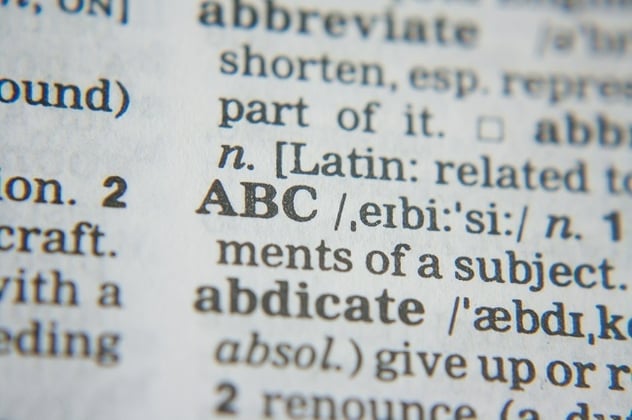 Hair testing can be a complex subject to get to grips with - which is why we’ve published our FAQs for family lawyers, as well as our ‘Hair Testing 101’ articles that cover how drugs enter the hair, some of the techniques involved, and the importance of process.

It’s a field where scientific terminology and acronyms - from metabolites to LC-MS/MS - can bewilder and bamboozle, and it’s easy to become blinded by the science involved. Ignoring the science altogether is one option, but a basic understanding of the terminology can help you understand how drug and alcohol test results come to pass, how we interpret them the way we do and what the results really mean.

To demystify the jargon surrounding hair testing, we’ve pulled together a glossary of terms to make sample requests and laboratory reports easy to understand.

Alcohol marker - Substances such as EtG and FAEE (see below) whose presence in hair samples can indicate chronic alcohol usage. These are incorporated into the hair via circulating blood, sweat or sebum.

Assay - An analysis conducted to determine not only the presence of a substance, but also the amount present.

Calibrators - Tests or samples containing known amounts of each drug being tested, which are analysed at the same time as the subject’s samples. These standards of increasing drug concentration to allow the building of a calibration curve against which the amount of the drug detected in the hair sample is compared, allowing quantification of the true amount present.

Chain of custody - The safeguarding of the hair testing process: the following of set protocols to ensure the results can stand up in court. This includes documentation of sample collection, sample handling and sample analysis, used to prove samples have not been tampered with. The chain of custody is key to the accreditation of laboratories - read more about our accreditation credentials here.

Cut-off - The point of difference between a positive and a negative hair drug testing result. Cut-off levels vary depending on the substance tested for, the analysis method, and between different laboratories. Read more on cut-offs here.

Ethyl glucuronide (EtG) - A metabolite (see below) of ethanol. It is formed in the body after ethanol exposure, as a result of drinking alcoholic beverages. EtG is an alcohol marker which can be used to assess whether alcohol has been consumed over a time period.

External contamination - Exposure to drugs via external sources, rather than via consumption, blood, sweat or sebum. It could be, for example, that a subject has been surrounded by marijuana smoke at a party, or touched their hair after unintentionally handling cocaine - which could lead to false positive results if proper decontamination procedures are not followed. Read more on external contamination here.

False negative - A test result that wrongly indicates the absence of drugs or alcohol in a subject’s sample when drugs and alcohol were consumed or present in the sample. Because hair drug testing can detect drug usage over an extended period of time, false negatives are less likely than with other methods, such as urine testing.

False positive - A test result that wrongly indicates the presence of drugs or alcohol in a subject’s sample. A false positive can sometimes be a result of external contamination or even of the use of certain hair products.

Fatty acid ethyl esters (FAEE) - Like EtG, FAEEs are metabolites of ethanol, and the result of fatty acids combining with alcohol in the body. Their presence signifies alcohol consumption, and they may be used as an alcohol marker to assess alcohol consumption levels over a period of time.

Gas chromatography-mass spectrometry (GC-MS or GC-MS/MS) - A process used to detect banned substances, by passing a sample mixture through a thin tube filled with a stream of carrier gas. This separates substances from the test sample into its individual components, for analysis. Here at Cansford Laboratories, we use liquid chromatography in conjunction with mass spectrometry, in a process known as LC-MS/MS.

Hair colour - A subject’s natural hair colour can affect the concentration of any drugs retained, with higher melanin levels (i.e., darker hair) linked with the retention of a greater concentration of drugs such as cocaine, codeine and morphine.

Immunoassay - An initial screening test for a hair sample, where the shape of the molecule is tested. If the reaction shows that the target substance is present, this is deemed a presumptive positive, and the sample is sent to a confirmation hair testing lab for liquid chromatography and mass spectrometry to confirm or deny the immunoassay result beyond any reasonable doubt.

ISO/IEC 17025 - A worldwide agreed accreditation standard for testing laboratories, which acts as an industry standard. Labs with this accreditation (including Cansford Laboratories) are recognised as using valid testing methods to generate reliable and accurate results. Test results from these laboratories can therefore be reliably used as evidence in a court or otherwise. Find out more about accreditation here.

Mass spectrometry (MS) - A process used to identify drugs in hair samples. An ion source breaks the molecules in the extracts from the prepared hair sample down into ions or transitions - its smallest possible form - after which the mass spectrometer identifies ions as a ‘molecular fingerprint’ which identifies the substances being tested for. Each substance is different at a molecular level, giving an accurate reading of the presence of drugs beyond reasonable doubt. Read more on mass spectrometry here.

Metabolite - A substance produced when a drug enters the body and is metabolised - broken down, absorbed and used as a result of chemicals in the body. These substances are absorbed into the bloodstream, and from there, deposited into hair follicles.

Presumptive positive - A preliminary positive hair drug test result as confirmed by an immunoassay, before conducting further testing (such as LC-MS/MS) which gives identification and quantities of the substance present for a confirmed positive.

Qualitative testing - Hair drug testing which merely confirms the absence or presence of drugs in a sample, as opposed to the quantity contained. At Cansford Laboratories, our two-stage process involves a qualitative first stage to detect the presence (or lack of) of a substance, followed by quantitative testing.

Quantitative testing - Testing that confirms, with precision and accuracy, the actual concentration of a drug found in a sample. At Cansford Laboratories, this is determined using LC-MS/MS.

Segmentation - Hair drug testing can measure the intake of drugs over several months. By segmenting the hair into lengths before analysis (10mm of hair is representative of an average of one month of growth), it is possible to gain a detailed chronological history of drug use.

Society of Hair Testing (SoHT) - A group founded in 1995 to promote scientific cooperation in the field of hair testing, to develop international proficiency tests and promote hair testing research. The SoHT also produces guidelines for the hair testing process - more on those here. With no overarching governing body for hair testing, the SoHT is regarded as the authority and standard on hair testing.

Solid phase extraction - A physical-chemical process used to purify hair samples, where unwanted substances like hair product are removed from the hair, but drugs and their metabolites remain.